Why I Quit Social Media year ago? 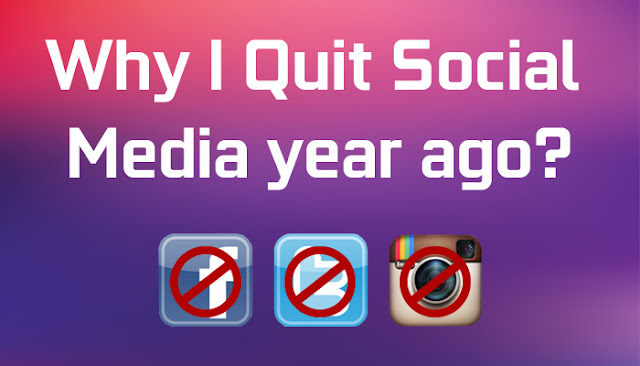 In this article I am going to speak about three things.

3) How I'm going to use social media now?

The main reason behind it I was compulsively checking social media and wasting lots of time on it. When I wake up in the morning the first thing I did to rollover all my social media accounts. Anytime I was bored and in awkward situation I pull up my phone and scroll through social media. Instead of doing activity that I deeply enjoyed and created value for me I took the easier way just to scroll the social media. I felt like I was not accomplishing very much in my life. Now I know some of you are thinking "why don't you just control yourself". Whenever someone quit social media, there is always outcry for people who just say why just don't you control how you use it? It's not that easy you are thinking let me explain why?

A book by Nicholas Carr, titled "The Shallows". This Book is essentially about how Internet is affecting our ability to focus, think and learn deeply. Just think why twitter allows only 140 chars? According to scientists most human can think thoughts that are 140 characters long and they thinks moment are only as good as they looks on Instagram. Scientists also explains "it's hard to change after a certain age" yes it's hard but not impossible.

Our brain loves to learn and learns to love. Every time we refresh the page there are newer information which rewards our brain with more dopamine.

Now what is Dopamine?

Wiki says: In the brain, dopamine functions as a neurotransmitter—a chemical released by neurons (nerve cells) to send signals to other nerve cells. The brain includes several distinct dopamine pathways, one of which plays a major role in reward-motivated behavior.

Because of dopamine we keep using social media for the long period of time.

In the end all I am saying while there are ways to control our social media usage we should also remember that social media is designed to be addictive.

First thing I could learn the more deeply and create more things. I begin creating my own games now I can play games in a free time and I can write articles like I always wanted to do it. I wanted to learn more and create more games and quitting social media provided me distraction free environment to do these things. I become more productive because I did not have notifications which distracted me all the time. Now I stay in my own room and begin to find out more about myself. I felt less influence about what everyone else might think about me.

Second thing I learned that I won't miss out anything while quitting social media. Everyone has a fear of missing out if they quit social media they think they will be out of the loop. But the truth is the only things you will be missing out are Memes, Gossip and Pop Culture news. The things that are completely useless for my life or anyone's life. Out of 100 dumb or meaningless post only 1 post is useful which is not worth it.

Third thing I learned that social media give rises to lots of fake relationship. I felt like I will lost lots of the superficial relationship while quitting social media. It's weird because in social media we feel like we are still connected we used to know. We like each other photos and see each other photos and think we are still knows each other. But the truth is so many years have passed then that time, we are different people now, we don't see all the experience that happens behind the scene we don't really knows each other anymore.

Lastly, I found myself happier, I no longer surrounded with fake things that really doesn't matter for me.

3. How I'm going to use social media now?

My goal now is to use social media deliberately and on my own terms. I tried not to sucked into highlight real and all negative aspects.

- I usually turn off all notifications so I'm not constantly being distracted.

- I usually don't check social media while I'm out.

- I don't respond to the post which is useless for me

- I only follow people who add value to me or my channel or make me happy to see their post.

What are Your Thoughts on Social Media? Would You Ever Quit?
Posted by Jamshaid Alam at 02:26